Delay Your Re-Tweet To Spread It Further

June 14, 2015
This morning my friend Jen Wagner wrote a beautiful post encouraging those who are considered leaders in education to reach out, mentor, and encourage others. As Jen's posts always are, this one is graceful, elegant, and correct. She tweeted about her post a little more than an hour ago, and even though I love what she wrote I did not re-tweet her link. I will eventually, but not yet.

Her tweet was popular. It has nine retweets already and twelve favorites, one from me. I'm waiting on my retweet because Jen and I have many followers in common and nine retweets has probably already spread her message pretty far for this hour. If all of the retweets for Jen's tweet happen in the first hour, then people who log on much later are unlikely to see it. But in a few hours a whole new group of users will be looking at their twitter feeds. To help make sure more people see Jen's wonderful post I will retweet it later today.

This is the point of a delayed retweet. Only a fraction of Twitter users are looking at their feed at any one time. To spread a message wider I like to retweet slower.

This matters if I am trying to spread the word about an edcamp, a twitter chat, a conference, or a blog post. If it is informational and I want more people to know about it, I will wait an hour or two and then retweet. My method is to favorite the things I want to retweet, especially when I am browsing on my phone. Then when I sit down with my laptop later I check those favorites and retweet them.

Of course, it also helps to know when you should tweet for maximum exposure. Though our social media world is global, most of my followers generally share the same hemisphere, so a 3:00 PM tweet reaches more people than a 3:00AM tweet. You can find out when most of your followers are online from Tweriod. It tells me that on Sundays I have the most followers online right before noon, so that's when I will retweet Jen's message about her new blog post.

If you found this post through Twitter, please go ahead and retweet, just wait an hour first. 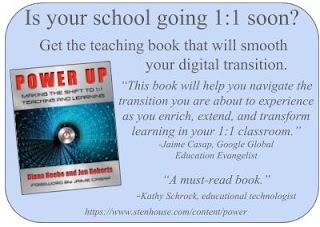