Well this is fascinating. Billionaire buys my favorite bird app and flies it straight toward the ground. So I get curious about other options. I've found a few. I posted a list of new handles on Facebook and a friend asked for more information about them, so here is a rundown of what I'm looking at. I'm listing them from most developed to least developed.

Note: All of this is based on my impressions as a user of these platforms for 1-3 days. I fully admit I do not know much yet, but in some cases there isn't that much to know.

Mastodon: You've probably heard about this one and been curious. Mastodon is like if Twitter and Discord  had a baby. It's open source and distributed. There are separate 'servers,' and you join one of those. If you don't like the server you join, you can 'migrate.' Those servers connect to each other as a 'federated' group. You can follow people on other servers, if you can find them. The web app is the easiest place to get started and the easiest way to find people. I'm @JenRoberts@techhub.social

Mastodon has several phone apps. One is official, but the rumor is that the less official apps are better/easier to use. Hashtags work in Mastodon. Use #introduction with your first post. Fill that post with lots of hashtags that interest you to help people find you. Miguel Guhlin put out a form and created a list of Edu folks on Mastodon. There are 365 folks on there as I grab the link today.
Navigate to your settings and choose Appearance/Enable advanced web interface to create columns that look like Tweetdeck. This makes it a little easier to navigate. Here's a recent screen grab. I blurred out the handles of anyone who wasn't my friend Judy. She is @judyblakeney@mastodon.world
Tip: Once you create your Mastodon handle, write a tweet that includes your handle, and then pin that tweet at the top of your Twitter feed. If you do that, people can use a tool called Fedifinder to scan their own twitter account follows and it will extract Mastodon usernames from pinned tweets. More of the folks who follow you now will be able to find you again.
Current impressions: Mastodon seems cool. Folks on there are smart people willing to spend the time to figure it out and they share interesting things. I'm looking forward to learning more and connecting with more people. Plus, the mastodon mascot is super cute.
Hive: So far you can only join Hive through the app and they only recently launched a beta version of an Android app, so it's mostly folks on iOS. It's really pretty. You can customize your profile page to look a lot like Twitter. Hashtags work, but take you to a page of images. Click an images and scroll the feed for the hashtag. It's an odd extra step. It's easy to use and easy to set up. It will attract a lot of folks who want something that feels like Twitter and Instagram merged.
Current impressions: I like it. I'll probably like it more when I can connect with more people. Without a web version that I can access on a computer it will have some limited utility for sharing things like teaching resources. On Hive I'm @JenRoberts.

Those of you who know me from twitter will recall that I am @JenRoberts1 there. Part of the silver lining of migrating to new platforms is the chance to get in early and drop the 1 from my handle.

Post: This is the newest entry to the field. It is still in a limited beta. I got access yesterday. It has great potential. The former CEO of Waze is working on it, so that's a good sign. It has an attractive user interface, but I haven't followed anyone there yet. Right now everyone essentially follows everyone else because the only feed is the main one. That will certainly change as development continues. I'm really looking forward to how this turns out. I expect it will be pretty and functional.
My Post handle is... you guessed it... @JenRoberts.
Current impressions: Positive, but it's really too soon to tell. I'm optimistic though.

Bluesky Social:  Jack Dorsey, former CEO of Twitter is working on this one. All you can do so far is enter your email to join the wait list to try the beta. I suggest doing that now.

I started talking to strangers on the internet on IRC in 1992. This feels almost like those early days. Get online. Say something. Hope someone says something back. Here we go again. Yippee ki-yay y'all. 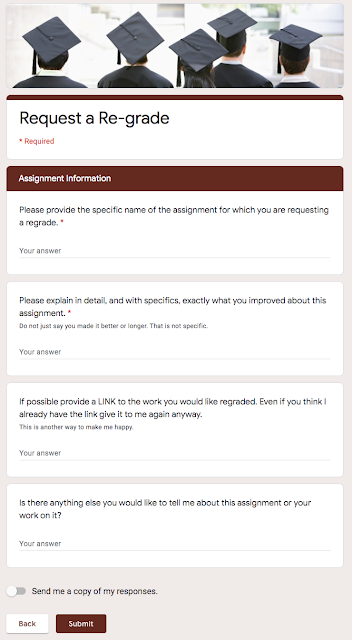 Request a Regrade: A Google Form You Can Have

I teach high school English. I have 140+ students. I like to give them a chance to improve their writing. I believe in performance based grading. All that together, means I get a lot of requests to re-grade work. This used to be a fairly casual thing. Students would ask me, or send an email. I'd add them to a list. I've got that list somewhere, I'm sure. It was here a minute ago. Did I leave it at school? Did I add that new request to the list? You get the idea. I started to lose track, and things got missed. The solution, like many of my organizational solutions, was a Google Form. Now, if a student wants me to re-grade a piece of work, they just need to fill out the re-grade request form. It's linked at the top of my class blog. If they email me or ask me in person, I remind them to fill out the form. The re-grade request form gets to ask all the questions I would want to know about the student work. What's the name of the assignment? What did you do to im 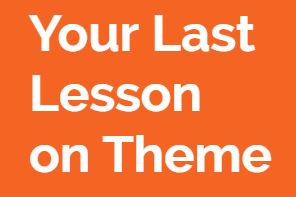