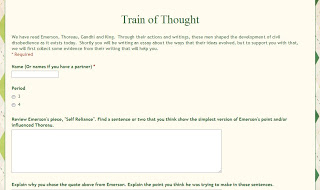 As an English teacher, you'd have to be living under a rock not to know that the Common Core Standards require students to do a lot of close reading and text analysis supported by evidence from those texts in their writing.

As an English teacher I have said, "Include evidence in your essay." more often than the Math teacher down the hall has said, "Show your work." Until recently, getting students to actually include text evidence in their academic writing was practically a moon shot.  Some over achieving students would try, but most wouldn't bother to go back and sift through the text to find the sentence or two that supported their nebulous thesis. But now, thanks to a simple Google Form, my students gather oodles of text evidence, do a preliminary analysis of it, and create a resource they can all use.

How Evidence Gathering Works:
We have been reading Emerson, Thoreau, Gandhi and Dr. King for the past few weeks. Students did close readings of all of the key texts working alone or with partners to annotate, paraphrase and generally grok the concepts involved.  Before introducing the prompt they would be writing about, I asked them to spend a period going back through the texts and selecting quotes that they felt best represented that writers ideas. I put a link on our class blog to a Google Form that requested a quote from each author and an explanation of that quote. Due to some school site logistics, our periods were shorter that day, so I divided the class into halves and asked some of them to focus on Emerson and Gandhi while the rest looked for evidence from Thoreau and King.

In itself this was a good way to have students review texts we had read over a period of weeks, but I knew the results of their efforts would soon be even more helpful to them.  A Google Form deposits the responses in a spreadsheet and that spreadsheet can be published.  I removed the student names and published their work, linking it on our blog as "Your Suggested Evidence".  The next day when I introduced the prompt it came to them with their co-created resource of evidence.

As I modeled writing my own version of the essay, I showed students how I would go to the spreadsheet and select a piece of evidence that supported the point I was trying to make.  I showed them how to copy the quote and then use ctrl-shift-v to paste it into my essay with the same formatting as my existing writing. (The shift key makes that work and saves lots of time reformatting.) I modeled that I would paste in the quote below where I was writing, so that I could decide how best to introduce it before I added it to my paragraph. And, of course, I modeled explaining how that evidence added to my point.

The results are stunning. Students don't have to break the flow of their ideas to find the evidence that fits their need. They are excited about having a collection of quotes to choose from that are (mostly) ready to use. I am most excited that many of them finally seem to understand how including textual support for their ideas improves their writing. I know (and so do they) that they won't always have a bank of evidence to draw from, but at least now that they have had the experience of successfully citing texts in their papers, they move on with a better understanding of how to do that in the future.  See an excerpt from a student paper.

Several are already even talking about gathering evidence for writing while they read, which is why I was so pleased to see something Jim Burke posted on Twitter this morning. It is a picture of a form he is using with his students (included here with his permission).  He calls it Paragraph Notes.  It asks students to select quotes while they are reading and to interpret those quotes as well. At the bottom students use their quotes and interpretations to write a summary of the text with evidence included. The sentence frames Jim provides are taken from They Say, I Say: The Moves That Matter in Academic Writing.  (A book I highly recommend if you don't already have it.)

Including textual evidence in their writing is something students will always have to do to meet expectations. Having them co-create a resource list of possible textual evidence to use is just one scaffold we can use to support their academic writing. They won't need it for long.

Image created by Dr. Ruben Puentedura, Ph.D. http://www.hippasus.com/rrpweblog/ SAMR, developed by Ruben Puentedura, is one model for examining the evolution of tech integration in classrooms. It focuses on the type of work students are doing and how much that work deviates from traditional classroom practices. In a sense, it measures the future against the past. This four minute video is great if you would like to hear him explain it in his own words. I like the SAMR model and I think it does what models are supposed to do, it get us talking and thinking about the work going on in our classrooms. This graphic shows the progression of a teacher's thinking with a bit of humor too. As a model though, I think SAMR has some issues we need to talk and think about more. This is my list of concerns. For further exploration: It privileges the modification and redefinition stages such that good teaching without tech is marginalized. Even after five years of 1:1 I still have